In late 2007 Chris Brown appeared on the Tyra Banks Show and in a foreshadowing of his recent arrest for domestic felony charges revealed he had witnessed domestic violence as a child.

“Some people, their families go through domestic violence and stuff like that. I don’t want to mention the person’s name but there was somebody who hurt my mom. Me having to deal with that from the age of seven all the way through to 13, me seeing that and being visually abused by it – it affected me,” Brown said.

He also claimed to have been so affected by his mother’s abuse that he wanted to make sure he didn’t “put a woman through the same thing that person put my mom through.”

Brown tried to explain the reason his mother stayed in the situation saying, “I guess when a woman’s in love, she don’t look at it right.” 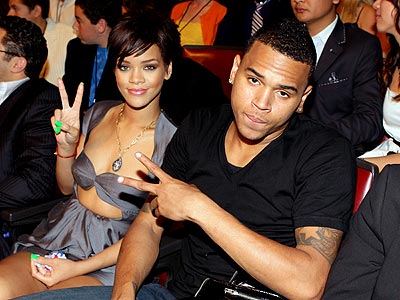 As previously reported, Chris Brown and Rihanna canceled their appearances at this year’s Grammy Awards after being involved in a domestic violence battle with one another.

While both stars have yet to go public with their legal drama, photos have surfaced on the web, showing the two together in Brown’s rented Lamborghini minutes before the incident was reported to LAPD.

But a source close to the couple has spoken out, identifying Rihanna as the victim (Brown surrendered to LAPD on Sunday and was released on $50K bail).

“Chris knocked her around,” the source tells People. “Black eye, blood, bruises. She had to be treated by a doctor.”

While Rihanna is cooperating with police in their investigation, the source says Rihanna is willing to forgive Brown (who is described as “low-key, easy-going and mild-mannered” by a former teacher).

“I would be so sad if she went back to him,” the source adds.

END_OF_DOCUMENT_TOKEN_TO_BE_REPLACED

Singers Chris Brown, Rihanna and Usher all cancelled their performances at the Grammy award show causing event producers to scramble for replacement acts.

On Saturday Usher cancelled his appearances at the pre-Grammy event honoring Clive Davis and the Grammy award show because of a “serious” family emergency. It was then discovered that his wife Tameka Foster had suffered injuries sustained from plastic surgery complications in Brazil.

On Sunday both Chris Brown and Rihanna cancelled their performances at the Grammy award show. Brown was arrested the same day under alleged domestic felony charges for battery to a female. According to a police statement, Brown and his female companion “became involved in an argument” around 12:30am on Sunday morning. After stopping his car, Brown and the woman got out and the argument escalated. The woman suffered visible injuries and identified Brown as her attacker.”

While the female’s identity was not confirmed, it is widely believed to be Brown’s girlfriend Rihanna. Brown was released on $50,000 bail on Sunday evening.

END_OF_DOCUMENT_TOKEN_TO_BE_REPLACED

Music’s got a new king in Chris Brown–at least according to Billboard, which named the 18-year-old singer the top artist of 2008.

“It’s bigger than what I can ever imagine. It’s unexpected totally, so it’s a surprise,” Brown, who also nabbed the honor in 2006, said.

With hits like “With You,” “Forever” and “No Air” (with Jordin Sparks), Brown heated up the charts consistently through 2008.

“I’ve had a good year but I still feel like a little insecure in those parts. I’m like, `There’s little ol’ me getting an award’ — that’s incredible,” he said.

Lil Wayne was runner-up, girlfriend Rihanna was No. 3, and Alicia Keys and Taylor Swift rounded out the top five.