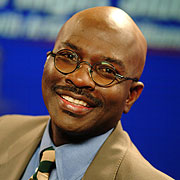 Conservative political commentator Armstrong Williams, who has never voted for a Democrat for president and was hailed as “one of the most recognizable conservative voices in America” by the Washington Post, may vote for Barack Obama—gasp! a democrat.

“For the first time in my life, history thrusts me to really seriously think about it,” Williams told the AP. “I can honestly say I have no idea who I’m going to pull that lever for in November. And to me, that’s incredible.”